Coughs play a role in clearing irritants and infections from the body, but persistent coughing can be annoying. The best treatment for a cough will depend on its underlying cause. There are many possible causes of coughs, including allergies, infections, and acid reflux.

Some natural remedies may help to relieve a cough. However, it is important to remember that the U.S. Food and Drug Administration (FDA) do not monitor herbs and supplements, so people who use them may be at risk of using low-quality products and impurities.

You should also be aware that some herbs and supplements can interfere with medications, which may result in unwanted side effects.

If a cough is severe or persists for more than a few weeks, it is essential to seek medical advice.

A popular home remedy for coughs is mixing honey with warm water.

According to some research, honey may relieve coughs.

A study on treatments for nighttime coughing in children compared dark honey with the cough-suppressing medication dextromethorphan and with no treatment.

The researchers reported that honey provided the most significant relief from coughing, followed by dextromethorphan.

Although the benefits of honey over dextromethorphan were small, parents rated honey most favorably of all three interventions.

To use honey to treat a cough, mix 2 teaspoons (tsp) with warm water or an herbal tea. Drink this mixture once or twice a day. Do not give honey to children under 1 year of age.

Ginger may ease a dry or asthmatic cough, as it has anti-inflammatory properties. It may also relieve nausea and pain. One study suggests that some anti-inflammatory compounds in ginger can relax membranes in the airways, which could reduce coughing. The researchers mainly studied the effects of ginger on human cells and animals, so more research is necessary.Brew up a soothing ginger tea by adding 20–40 grams (g) of fresh ginger slices to a cup of hot water. Allow to steep for a few minutes before drinking. Add honey or lemon juice to improve the taste and further soothe a cough.

Be aware that, in some cases, ginger tea can cause stomach upset or heartburn.

Staying hydrated is vital for those with a cough or cold. Research indicates that drinking liquids at room temperature can alleviate a cough, runny nose, and sneezing.

However, people with additional symptoms of a cold or flu may benefit from warming up their beverages. The same study reports that hot beverages alleviate even more symptoms, including a sore throat, chills, and fatigue.

The symptom relief was immediate and remained for a continued period after finishing the hot beverage.

Hot beverages that may be comforting include:

A wet cough, which is one that produces mucus or phlegm, may improve with steam. Take a hot shower or bath and allow the bathroom to fill with steam. Stay in this steam for a few minutes until symptoms subside. Drink a glass of water afterward to cool down and prevent dehydration.

Alternatively, make a steam bowl. To do this, fill a large bowl with hot water. Add herbs or essential oils, such as eucalyptus or rosemary, which may also relieve decongestion. Lean over the bowl and place a towel over the head. This traps the steam. Inhale the vapors for 5 minutes. If the steam feels hot on the skin, discontinue until the skin cools down.

Marshmallow root is an herb that has a long history of use as a treatment for coughs and sore throats. The herb can ease irritation resulting from coughing because of its high mucilage content. Mucilage is a thick, gluey substance that coats the throat.

One small study revealed that an herbal cough syrup containing marshmallow root, along with thyme and ivy, effectively relieved coughs resulting from common colds and respiratory tract infections. After 12 days of taking the syrup, 90 percent of the participants rated its effectiveness as good or very good.

Marshmallow root is also available as a dried herb or a bagged tea. Add hot water to either and then drink it immediately or allow it to cool first. The longer the marshmallow root steeps in the water, the more mucilage will be in the drink.

Side effects can include stomach upset, but it may be possible to counter this by drinking extra fluids.

This simple remedy is one of the most effective for treating a sore throat and wet cough. Salt water reduces phlegm and mucus in the back of the throat which can lessen the need to cough.

Stir half a teaspoon of salt into a cup of warm water until it dissolves. Allow the solution to cool slightly before using it to gargle. Let the mixture sit at the back of the throat for a few moments before spitting it out. Gargle with salt water several times each day until the cough improves.

Avoid giving salt water to younger children as they may not be able to gargle properly, and swallowing salt water can be dangerous.

Pineapples contain bromelain, which may help to treat a cough.

Bromelain is an enzyme that comes from pineapples. It is most plentiful in the core of the fruit.

Bromelain has anti-inflammatory properties and may also have mucolytic properties, which means that it can break down mucus and remove it from the body.

Some people drink pineapple juice daily to reduce mucus in the throat and suppress coughing. However, there may not be enough bromelain in the juice to relieve symptoms.

Bromelain supplements are available and may be more effective at relieving a cough. However, it is best to speak with a doctor before trying any new supplements.

It is possible to be allergic to bromelain, and this herb can also cause side effects and interact with medications. People who take blood thinners or specific antibiotics should not take bromelain.

Thyme has both culinary and medicinal uses and is a common remedy for a cough, a sore throat, bronchitis, and digestive issues.

One study found that a cough syrup consisting of thyme and ivy leaves relieved coughing more effectively and more rapidly than a placebo syrup in people with acute bronchitis. Antioxidants in the plant may be responsible for its benefits.

To treat coughs using thyme, look for a cough syrup that contains this herb. Alternatively, make thyme tea by adding 2 tsp of dried thyme to a cup of hot water. Steep for 10 minutes before straining and drinking.

Acid reflux is a common cause of a cough. Avoiding foods that can trigger acid reflux is one of the best ways to manage this condition and reduce the cough that accompanies it.

Every individual may have different reflux triggers that they need to avoid. People who are unsure of what causes their reflux can begin by eliminating the most common triggers from their diet and monitoring their symptoms.

The foods and beverages that most commonly trigger acid reflux include:

Native Americans traditionally used slippery elm bark to treat coughing and digestive issues. Slippery elm is similar to marshmallow root as it contains a high level of mucilage, which helps to soothe a sore throat and cough.

Make slippery elm tea by adding 1 tsp of the dried herb to a cup of hot water. Steep for at least 10 minutes before drinking. It is important to note that slippery elm can interfere with the absorption of medications.

NAC is a supplement that comes from the amino acid L-cysteine. Taking a daily dose may lessen the frequency and severity of a wet cough by reducing mucus in the airways.

A meta-analysis of 13 studies suggests that NAC can significantly and consistently reduce symptoms in people with chronic bronchitis. Chronic bronchitis is a prolonged inflammation of the airways that causes mucus build-up, a cough, and other symptoms.

The researchers suggest a daily dose of 600 milligrams (mg) of NAC for people without airway obstruction, and up to 1,200 mg where there is an obstruction.

NAC can have severe side effects, including hives, swelling, fever, and difficulty breathing. Anyone considering this approach should speak to a doctor first.

Miso soup is rich in probiotics.

Probiotics do not directly relieve a cough, but they may boost the immune system by balancing the bacteria in the gut.

A superior immune system can help to fight off infections or allergens that may be causing the cough.

One type of probiotic, a bacteria called Lactobacillus, provides a modest benefit in preventing the common cold, according to research.

Supplements containing Lactobacillus and other probiotics are available at health stores and drug stores.

Some foods are also naturally rich in probiotics, including:

However, the number and diversity of probiotic units in foods can vary greatly. It may be best to take probiotic supplements in addition to eating probiotic-rich foods.

Tips to help prevent a cold

It is not always possible to avoid getting a cough, but the following tips can reduce the risk:

Allergy symptoms can sometimes mimic those of a cold. Reduce allergy flare-ups by avoiding triggers such as pollen, dust mites, animal dander, and mold. See a doctor about getting allergy shots or medications.

When to see a doctor

See a doctor if the following symptoms accompany a cough:

Call 911 or go to the nearest emergency department if a cough: 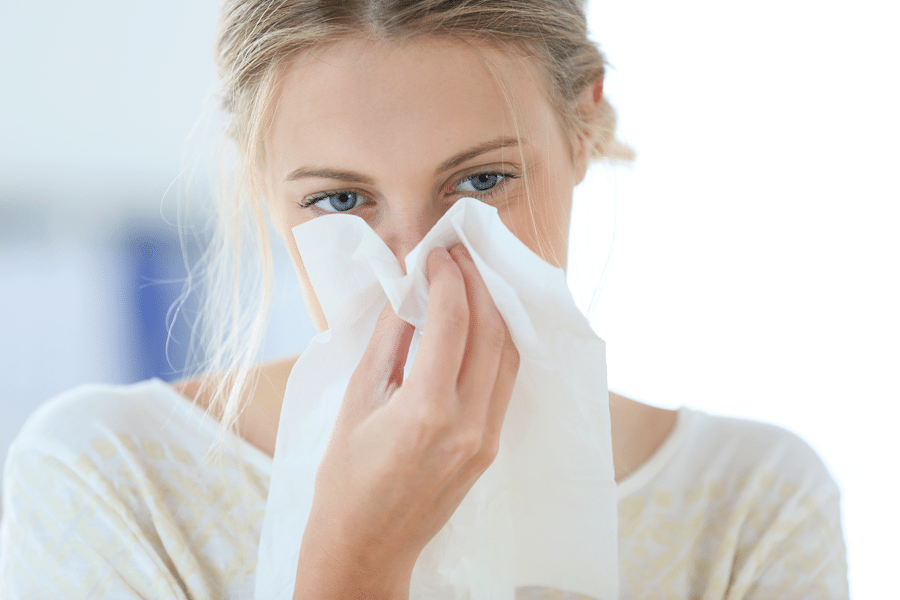