Pregnancy tests help women to determine if they are pregnant. These tests work by picking up on markers in urine or blood that indicate pregnancy.
Knowing which type of pregnancy test is most suitable, and understanding how to use them, helps ensure results are accurate.
Whether taken at home or in a doctor’s office, being informed about the pregnancy test process makes it easier to understand what the results mean, and what to do next.
Types of pregnancy test
There are two main types of pregnancy test available: urine tests and blood tests.
Urine tests
Urine tests can be taken at home or at the doctor’s office. They detect the presence of the pregnancy hormone, human chorionic gonadotropin (hCG).
The hCG hormone circulates in a woman’s blood once a fertilized egg has attached to the uterus wall. This usually happens 6 days after fertilization.
According to the American Pregnancy Association, levels of hCG double every 2 to 3 days, peak by 8 to 11 weeks of pregnancy, and then begin to level off. HCG can usually be detected by a urine test 12 to 14 days after conception.
Home pregnancy test
Home pregnancy tests can be purchased in a pharmacy or drugstore. They normally cost less than $20 and are easy to use. If used correctly, they give excellent results.
Results are usually visible within 3 to 10 minutes or sometimes sooner.
Clinical urine test
Clinical urine tests are performed at a doctor’s office. Like home tests, they also look for the presence of the hCG hormone in urine.
Although they produce the same level of accuracy, tests performed in a clinical setting usually avoid some of the errors that can happen with home tests.
Blood tests
Although less common than urine tests, blood tests to detect hCG levels are available. These are always carried out at the doctor’s office, and results take longer than urine test results.
Blood tests are usually more expensive but some can be taken earlier than urine tests to determine results. The two types of blood tests are:
* Qualitative hCG blood test: This checks hCG levels, giving a “yes” (pregnant) or “no” (not pregnant) result. They can detect hCG levels around 11 days after conception.
* Quantitative hCG blood test: This is able to measure specific levels of hCG, even if levels are low.
Further tests may be needed if results aren’t as expected. For example, if the hCG level is higher or lower than it should be for the estimated pregnancy stage.
This process can help indicate ectopic pregnancy, miscarriage, or a more accurate due date.
Online tests
Several websites and phone applications have tests that claim to calculate the likelihood of being pregnant. These can be used as a source of information, but should not replace real pregnancy tests.

How to use pregnancy tests
For a clinical urine test, the doctor will ask for a sample of urine. This can be tested immediately.
Blood tests require a sample of blood to be drawn and sent for testing.
Home pregnancy tests are simple to use. It is important to follow the instructions closely to get the most accurate result.
Most brands can be used on the first day of a missed period, but some more sensitive tests can be used sooner. Some clinical tests can also be taken earlier than this.
In general, home pregnancy urine tests involve one of the following methods:
* urinating directly onto the test stick
* urinating into a cup and dipping the test stick in
* urinating into a cup and using a dropper to drop urine onto the test window
Many manufacturers recommend taking two home tests to confirm results. This is because hCG levels may be too low to be detected at first. To ensure the most accurate results, it is best to wait a few days to 1 week between the two tests.

Accuracy
Many home pregnancy tests claim to be accurate up to 99 percent of the time. Clinical tests can be even more accurate.
However, using them correctly is vital. Several studies suggest incorrect use of tests has led to many women reporting false results.
Most tests can be used on the first day of a missed period but it’s advisable to wait 1 week after a missed period for accuracy.
This is because 10 to 20 percent of pregnant women won’t detect their pregnancy on the first day of their missed period. This can be due to many women having irregular periods, or miscalculating when their period is due.
In addition, a number of other factors play a role in the accuracy of results, including:
* time of day the test is taken
* length of time after conception
* when ovulation occurs
* how quickly the fertilized egg implants
* how well instructions are followed
* how sensitive the test is

What do the results mean?
If a home pregnancy test reads positive, it is important for a doctor to confirm the results with a clinical test.
Results of a pregnancy test are either positive or negative. If taking a clinical test, the doctor will explain what the results mean. If using a home test, it’s important that women refer to the test instructions to ensure they understand what the colors, symbols, or words indicate.
Positive result
A positive result indicates pregnancy, even if the color, symbol, or words on the test window are faint. It’s a good idea to confirm this result by taking a clinical test.
Very rarely, a false-positive result occurs. This means the woman taking the test is not pregnant, despite the test indicating she is. False-positives can occur due to:
* early miscarriage
* certain medications
* ovarian tumors
* liver disease
* kidney failure
* expired test kits
Negative result
A negative result means pregnancy is unlikely. However, false-negative results are common.
These are where pregnancy may still occur but is not yet showing up on the test. They can occur for a number of reasons, including:
* incorrectly taking the test
* testing too soon
* testing with urine that is too diluted
* not waiting long enough for results
* expired or faulty test
Retesting within a week is advisable for all test results. This is particularly important if a woman is experiencing some of the symptoms of early pregnancy or if the test result is negative.
When to see a doctor
A woman should always consult her doctor if she has any queries about the pregnancy or test results. If the home pregnancy test is positive, a doctor can confirm this with a clinical test and begin to arrange prenatal care.
If a home pregnancy test is negative but a woman’s periods don’t resume, she should consult a doctor to determine the cause of the missed periods. 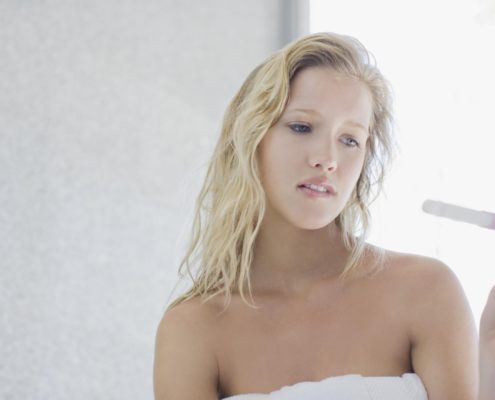