The gut microbiota plays a crucial role in maintaining our body’s overall health. New research shows what happens if we do not feed our gut microbes with the fiber they need to survive.

Gut bacteria are essential to keeping our body healthy.

Our gut microbiota contains at least 1,000 different species of known bacteria, summing up 3 million genes.
We share one third of our gut bacteria with other people, while the composition in our other two thirds is unique to each one of us.
Gut microbiota is important to our health because it contributes to a healthy immune system by acting as a barrier against other harmful microorganisms
It also helps with digesting foods that the stomach and small intestine have not been able to digest, as well as producing some vitamins.

We have always been told by healthcare professionals and nutritionists that fiber is important to a healthy diet.
But new research examines exactly what happens if our intestinal microbes do not receive the appropriate amount of fiber.

Studying the behavior of gut bacteria in mice

Researchers bred mice especially for the study. Mice were born and raised without any gut bacteria of their own. They then received a transplant of 14 bacteria that normally live in the human gut.
Knowing the genetic signature of each bacterium, scientists were able to track the evolution of each one of them over time. They used a germ-free lab facility and genetic techniques that allowed them to see what bacteria were present and active under different dietary conditions.
Researchers infected the mice with a strain of bacteria that is the equivalent of E. coli in humans. Then they examined the impact of diets with varying amounts of fiber, as well as a diet with no fiber at all.
Researchers tried a diet that was 15 percent fiber, made from minimally-processed grains and plants. They also tried a diet that was rich in prebiotic fiber – a purified form of soluble fiber that is similar to what some processed foods and dietary supplements contain.

As revealed by the study – published in the journal Cell – the induced infection did not fully spread in mice that received the 15 percent-fiber diet. Their mucus layer remained thick, protecting them against the infection.
But when scientists replaced the diet with one that lacked fiber altogether, gut microbes started eating the mucus. Even a few days of fiber deprivation led the bacteria to start invading the colon wall.
Gut microbes rely on fiber for their food, and when they do not get it, they start eating away at your gut. This makes the gut more prone to infections.
The diet rich in supplement-like prebiotic fiber had the same results as the diet lacking fiber completely. The mucus layer started eroding as a result of the action of microbes.

Researchers were also able to see what fiber-digesting enzymes the bacteria were making. They found 1,600 different enzymes that digest carbohydrates – a complexity similar to the one found in the human gut.
A lack of fiber also triggered a higher production of such mucus-degrading enzymes.
Scientists were able to look at images of the “goblet” cells on the colon wall that produce mucus. They could clearly see how the mucus layer got progressively thinner as the mice received less fiber.
In a normal gut, mucus is being produced and degraded at a steady pace. But on a fiber-deprived diet, mucus was degraded at a much higher pace than it was produced.
Examining the gut tissue of infected mice, researchers were able to see inflammation across a wide area of thinning, and even patchy tissue.
Infected mice that received a diet rich in fiber also displayed inflammation but across a much smaller area.

Future research to study different diets In the future, we want to study the effect of different prebiotic combinations over a longer period of time, as well as the impact of an intermittent natural fiber diet.
Researchers would also like to find the biomarkers that signal the state of the mucus layer in human guts, such as the number of mucus-degrading bacteria.
We would like to study the impact of a low-fiber diet on chronic illnesses such as inflammatory bowel disease.
“While this work was in mice, the take-home message for humans amplifies everything that doctors and nutritionists have been telling us for decades: Eat a lot of fiber from diverse natural sources.
Your diet directly influences your microbiota, and from there it may influence the status of your gut’s mucus layer and tendency toward disease. But it’s an open question of whether we can cure our cultural lack of fiber with something more purified and easy to ingest than a lot of broccoli.” 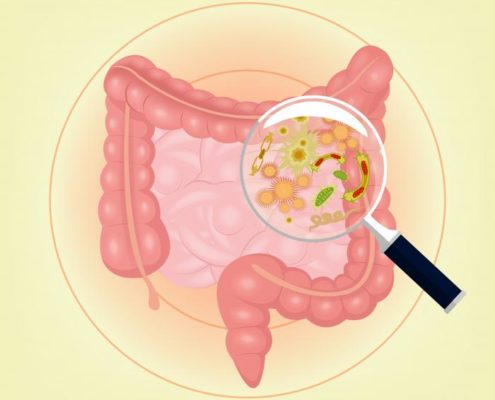